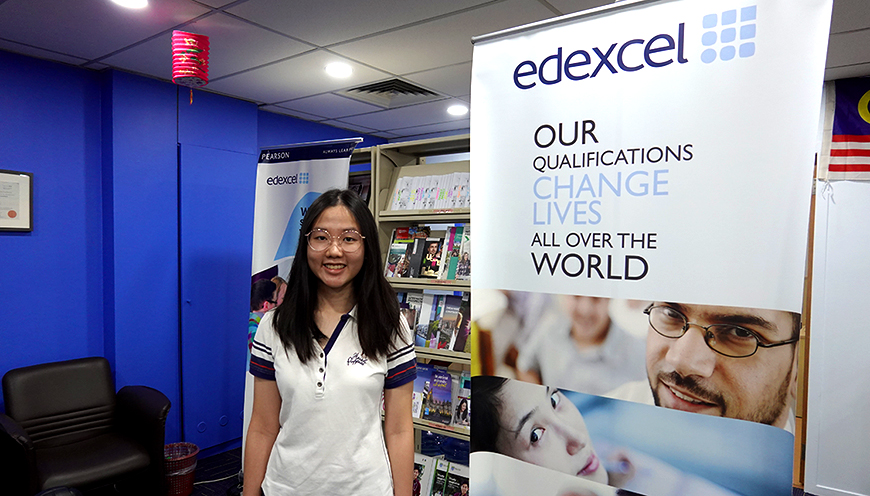 Ti Jia Qian, an A-level student at HELP Academy is a recipient of a full scholarship from the Japanese Government Monbukagakusho, which is the Japanese word for the Ministry of Education, Culture, Sports, Science and Technology of Japan, and is also known by its acronym, MEXT. Jia Qian is amongst 10 other Malaysian candidates to receive the scholarship. The Government of Japan offers several scholarship programmes each year for Malaysian nationals to apply.

Jia Qian studied at Tsun Jin High School and is now doing A-Levels at HELP Academy. She is a Physical Sciences student studying Mathematics, Further Mathematics, Physics and Chemistry. She said she enjoys learning Sciences because it helps her understand and appreciate nature a lot better. As an example, Jia Qian said, “by learning about various laws of nature in Physics helps me relate them to daily phenomena in my life, and also Math and Further Math really helped improved my sense of logic. I am thoroughly enjoying my classes now, and I plan to pursue Civil Engineering at university.”

When asked about how she was able to get the scholarship, Jia Qian said a friend of her mother's recommended the scholarship. She first had to fill up an application form which one can find on the official Japan embassy website. Then she was called in for a written examination, and after two months, she was invited to an interview at the Japan embassy. By this time, she had to submit a variety of documents like her SPM certificate, and also a recommendation letter. She was honoured and thankful that her Math lecturer at HELP Academy helped to write a strong recommendation letter. Four months after the interview, the MEXT committee emailed her the results.

The MEXT Scholarship 2021 is a fully funded scholarship for international students who wish to study at Japanese universities. This scholarship is available for undergraduate, masters, PhD and training studies. The scholarship covers tuition fees, accommodation, monthly living allowances, and round airfare travel expenses from the country of origin to Japan.

Jia Qian has always been fascinated by buildings and structures, and the thought of building infrastructures for the use and convenience of other people inspires her. She was inspired to learn more about the science behind it, and also the amount of work put into the planning of the construction processes. She chose Japan specifically because Japan is infamous for its abundance of natural disasters. Because of this, the Japanese have developed their own technology to build structures that are earthquake-resistant and typhoon-resistant. Besides, the Japanese are quite well-known for being well-mannered, punctual and meticulous. They have built a lot of infrastructure that are unmatched by any other country. Jia Qian is ambitious, so the University of Tokyo is her targeted university. It is the most prestigious and selective university in Japan, and it is also one of the top engineering institutions in the world.

Some of the advice Jia Qian would like to share with students who are interested in applying for the scholarship is to be patient and to believe in oneself. She would strongly encourage other students to take up activities or join societies that can showcase one’s interest towards Japan. In her case, she mentioned multiple times of her experience in joining the Japanese language club in high school, and the Japanese judges seemed genuinely impressed. Besides, she thinks it is important to start learning the language as soon as possible as this would be a huge head start. Lastly, the MEXT written examination itself is designed to be tough, but she said to give the best and do not give up as life is full of surprises.

“We’re very pleased that Jia Qian has won the scholarship to study in Japan. This is a testament that HELP’s A-level programme is widely accepted as among the best preparation for university study in the region and internationally. This has been achieved by a consistent adherence to the same high standard of teaching and mentorship that has made HELP’s reputation as the leader in higher education provision,” says Mr Yeap Soon Chye, Head of A-Levels at HELP Academy.

Strong academic leadership is the reason behind this success. The A-levels department has won widespread praise and recognition for its achievements. At the Edexcel World Conference in Hong Kong in 2011, it was declared the Best A-Level Centre in the World.

The department consistently receives Outstanding Pearson Learner Awards for the highest marks attained by its students in specific A-level subjects in Malaysia and internationally. To date, it has received 101 of these awards. Perhaps the strongest testimony of quality has come from Cambridge University itself.