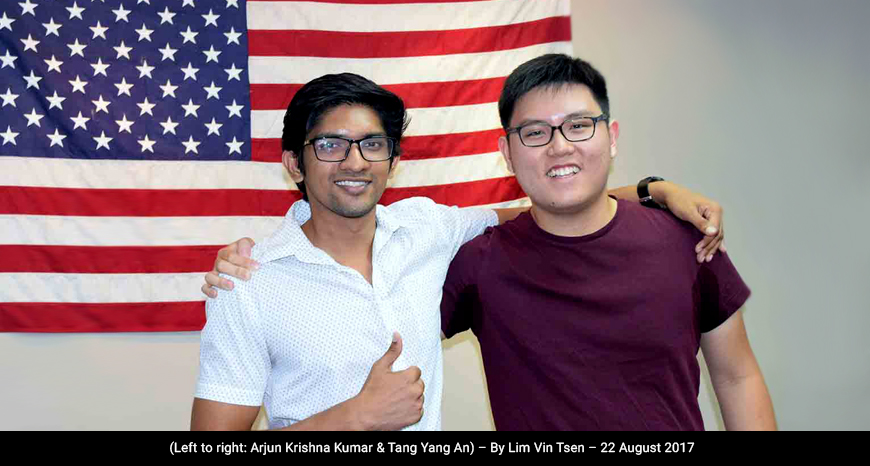 HELP University’s American Degree Program (ADP) Department recently invited two of their alumni graduates who transferred and attended the University of Illinois at Urbana-Champaign (UIUC). Both Arjun Kumar and Tang Yang An sat down with a class full of eager and attentive ADP students as they regaled them with tales of their time spent in the US. Arjun transferred to UIUC for the fall semester in 2013 and graduated in May 2016, whereas Yang An transferred in the fall semester of 2014 and will graduate by the end of Fall 2017.

Arjun, who earned his bachelor’s degree in mechanical engineering, said that he chose to study at HELP’S ADP because HELP offered good merit-based scholarships and that the university’s campus was very convenient for him to travel to. He decided to study mechanical engineering at UIUC because it was ranked as one of the five best engineering universities in the US. Moreover, UIUC did not require transfer students to start from their freshmen year, unlike some of the other highly ranked universities. Arjun plans to continue studying for his Masters in Energy Systems as it is his goal to promote the development of sustainable energy and transportation.

As a mechanical engineering student at UIUC, Arjun participated as the Heating, Ventilation, and Air-Conditioning (HVAC) Co-Lead for the Illinois Solar Decathlon – Race to Zero Team, which finished second place in last year’s competition, hosted by the US Department of Energy. He was also part of the Chainless Challenge Senior Design Team that finished fifth at the previous year’s national competition hosted by Parker Hannifin and the National Fire Protection Association (NFPA). Arjun was formerly the Vice President of Chapter Relations for Engineers Without Borders in 2015. He was also an active member of the Malaysian Students Association (MASA UIUC) and the International Mechanical Engineering Honor Society, Pi Tau Sigma.

In Spring 2015, Arjun took part in a study abroad programme to KTH Royal Institute of Technology in Stockholm, Sweden, where he focused his studies on renewable energy and environmental sustainability. After graduating in May 2016, Arjun took a semester off to travel and build volunteer experiences abroad, while applying to graduate school.

As an outstanding graduating senior in UIUC, Arjun was picked to be in the top 100 Senior Honorary in the University of Illinois at Urbana-Champaign. The Senior 100 Honorary is a programme of the University of Illinois Alumni Association that recognises notable seniors across campus for their past achievement and future commitment to the university.

Since 1994, HELP University’s American Degree Program (ADP) has successfully transferred over 4,500 students to reputable universities in the US. The programme uses an American style teaching approach specifically designed to ensure that HELP’s ADP students are accepted by over 100 of the best universities in the US or Canada. Students can opt to major in almost any career fields such as Business, Engineering, Arts, Communication, Natural and Applied Sciences, Design and more.

Both Arjun and Yang An are alumnus from the University of Illinois at Urbana-Campaign, USA. The university is in the twin cities of Champaign and Urbana (total population 207,000) in east-central Illinois. Situated about 140 miles south of Chicago, 125 miles west of Indianapolis, and 180 miles northeast of St. Louis.